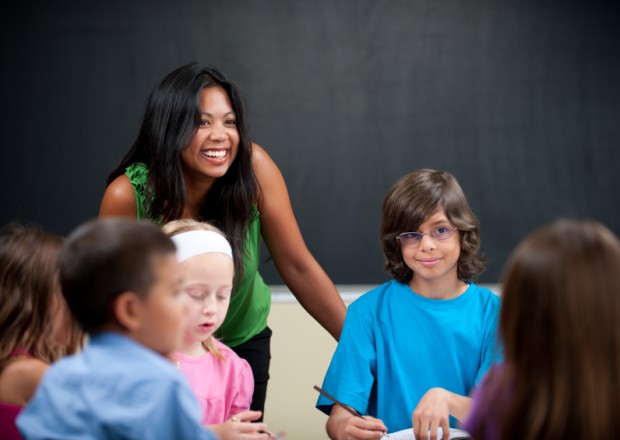 When choosing where to live and work as an Elementary School teacher, there are many important factors to consider. Salary may be high on the list; however, don’t forget to factor in Cost of Living adjustments. Rhode Island may have the highest actual average wage for Elementary Teachers at $73,040; but as the state with the 7th highest cost of living, this state shows up at #29 after adjusting values.

Making the right decision when choosing what state to live in can be key in having a fulfilling, rewarding career as an elementary teacher. Much of the decision is based on personal preference such as climate, outdoor activities and arts & entertainment offerings; and what makes the decision even more complex is that many times, the states with the poorest student performance offer some of the best teaching environments. States with historically poor showings in national rankings are often at the forefront of new innovations in the classroom.

Some of the factors you’ll want to consider when making your decision where you’ll teach are: “What is the student to teacher ratio in the classrooms?” “How do the state government and local groups support local teachers, and in what ways?” Of course, salary is important; but so too is the standard of living in the state you’ll be teaching. You might wonder “How do people like living in this particular state?” and “What is the general attitude toward teachers and education?”Here, then, are 10 of the top states for Elementary School Teachers in the nation (listed alphabetically):

In recent years, Arkansas has made great strides in the public education system. According to Education Week’s Quality Counts report, Arkansas’s standards, accountability and assessments contribute to its fifth place rank in the US. Coupled with a small student to teacher ratio and an adjusted teacher salary at #13; Arkansas shows to be a positive environment in which to pursue a career in elementary education.

Delaware is an innovator in terms of new technologies and applications in education. They’ve recently gathered a “Dream Team” of 34 of the state’s most accomplished teachers to collaborate on best practices for teachers. Placing in the top 5 states of adjusted salaries for elementary school teachers; strong support of the community, smaller than average class size, and a larger state-invested revenue per student; Delaware is a great place to teach.

With new teachers garnering a higher than average salary, and seasoned teachers’ salaries 6th in the nation (10th when adjusted for Cost of Living) Massachusetts remains a desirable place to teach. Student performance surpasses the national average in Massachusetts, with students performing high even when compared to students globally. The legislature remains vested in education, as shown by the fact that revenue invested per student remains in the top 6 states.

Beginning Teacher salary ranks 10th in the nation in Michigan, and teachers can expect continued growth in salary levels. Adjusted for Cost of Living, Michigan teachers receive the highest level of pay in the nation, according to the Bill and Melinda Gates Foundation. Although Michigan has historically ranked low in student performance, there are many excellent job opportunities for teachers, especially in pre-school and elementary school education.

North Carolina shows up in the top 20 states for Elementary school teachers as adjusted by the Cost of Living Index. Additionally, North Carolina leads the nation in Board Certified teachers who also receive a salary supplement on top of their pay; and a supportive mentoring program for new teachers.

Ohio is a very teacher-friendly state, with teacher pay in the top 20, and coming in at #3 when adjusted by cost of living. The state also has one of the lowest student to teacher ratios. The Ohio legislature has consistently voted to expand innovative programs for teachers within the state and the Ohio Network for Innovation and Improvement is reforming the model of schools statewide.

Don’t pass up Oregon if you’re looking for a great place to teach Elementary Education. Oregon school systems continue to be top notch in the country, largely due to their stringent requirements for teachers. Don’t let this deter you, however. Professional development is great for the classroom and the teacher. Additionally, Oregonians think their state is one of the best places to live in the nation, according to a recent Gallup Poll.

Pennsylvania shows up at number 4 on the list of highest paid elementary school teachers, adjusted by Cost of Living. This, in addition to the fact that the revenue invested per student in Pennsylvania is in the top 10 of the nation and a small student to teacher ratio make Pennsylvania an attractive place to teach for new and seasoned teachers alike.

With Texas ranking high as one of the best places to live in the US according to a recent Gallup Poll, as well as ranking in the top 12 states for adjusted elementary education salaries, Texas remains a strong candidate for elementary teachers. Several other factors make Texas a good prospect including “Teach for Texas” which is a conditional grant program and the Certified Educational Aide Exemption Program, which offers tuition exemptions for educational aides wanting to earn certification.

New, rigorous requisites for teachers have increased student performance, teacher benefits and compensation packages and have provided opportunities for outstanding educators to shine. Wyoming offers a small student to teacher ratio as well as adequate state and local funding per student. Additionally, 69% of the people living in Wyoming think their state is one of the best possible places to live in the US, according to Gallup Polling. All of these attributes make Wyoming a great place to live and teach.

Each state offers unique benefits to teachers; so it’s important to consider many factors when job hunting. Consider the things that are important to you when determining where to take that next (or first) teaching job. Don’t immediately pass up states that haven’t historically ranked high in education – you many find the most innovation there. Also, don’t forget to factor in the amount of purchasing power you’ll have with your hard-earned salaries… states with the highest pay rates also tend to have the highest cost of living. Take your time in deciding where to teach, and remember that every state has children that are in need of dedicated professionals to help them achieve their best!

Gallup Poll: Resident’s view of their state as best place to live. 2013

NEA: Rankings of the States 2012 and Estimates of School Statistics 2013

US Census Bureau 2010 and the ACCRA Cost of Living Index

Provide inspiration, words of warning or a good chuckle!